Notice: Only variables should be passed by reference in /home/smtu/web/en.smtu.ru/public_html/includes/seo.php on line 22
 Pskov

The city of Pskov lies along the Velikaya (Great) River at its confluence with the smaller Pskova River. Pskov is one of the oldest Russian towns; the city celebrated its 1100th birthday in 2003. In the Middle Ages, the town had gained a great importance as a centre for trade between the interior of Russia and the Hanseatic seaports of the Baltic. Its citadel, the kremlin, was called the Krom and established on a peninsula in the town beside the Velikaya. Pskov was under the protection of the city of Novgorod in the 11th and 12th centuries. In 1240 the Teutonic Knights captured Pskov, but were defeated in 1242 on the ice of Lake Peipus by Alexander Nevsky. In the 13th century Pskov already had about 60,000 residents. In 1348, Pskov achieved full independence as a republic, but in 1510 it was annexed by Moscow and in 1571 was sacked by Ivan IV (the Terrible). The city survived sieges by Stephen Báthory of Poland in 1581. Báthory’s private secretary Roman Catholic priest Piotrovsky wrote at that time, “We are admiring Pskov.  What a great city! Just like Paris!” 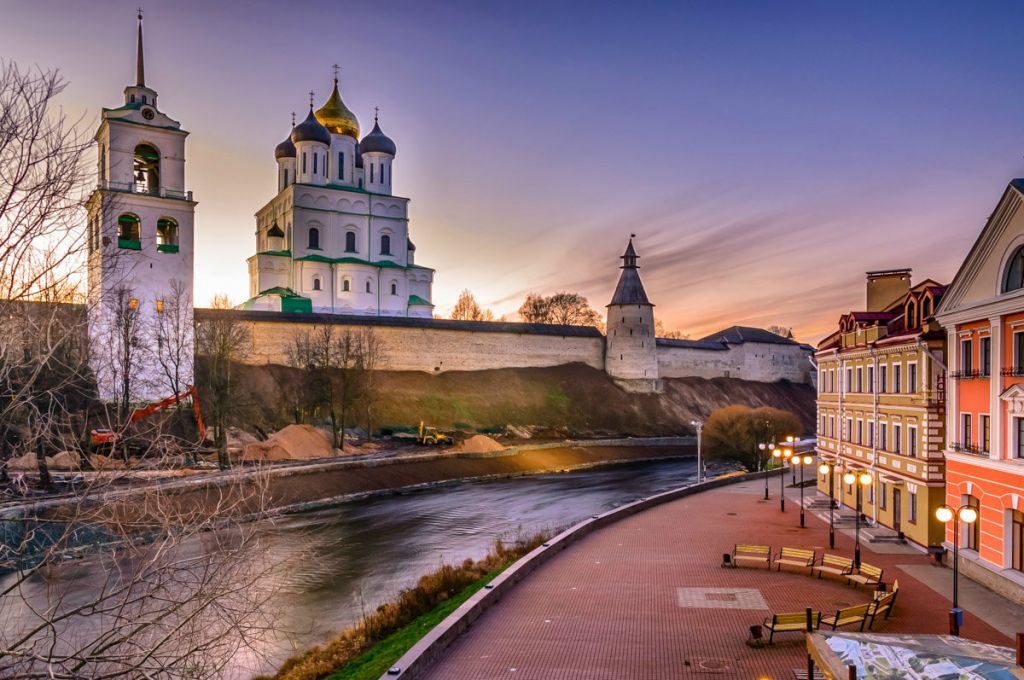 In World War II Pskov suffered enormous damage. The kremlin was heavily destroyed, as were most residential buildings in the city. Fortunately, many historic buildings survived thanks to their thick stone walls and well-establish construction traditions. The famous 17th-century Cathedral of the Trinity in the kremlin survived.

Modern Pskov is an important railway junction: the majority of trains going from St. Petersburg to Europe go through Pskov. The city has a university and several industrial enterprises. Many cafés and small restaurants make your stay in Pskov easy and tasty. To get to Pskov you can take an inter-city train or bus; it takes about 4.5 hours to get there from St. Petersburg.

Within 30 kilometers from Pskov is located another historical fortress and settlement of Izborsk which has a lot to see including historical reenactments in summer and traditional Russian holidays in winter and spring time.